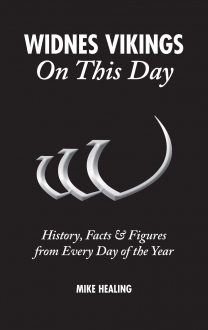 Widnes Vikings – On This Day

Widnes Vikings On This Day looks back at the most celebrated and memorable moments from the club’s illustrious history, providing a mixture of quirky anecdotes and legendary characters.

The book is an irresistibly dippable black-and-white diary – with an entry for every day of the year.

© Please contact us if you wish to use any content / images from this site. All rights reserved.